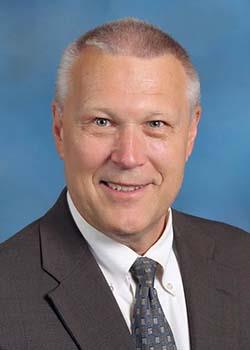 Director of Community Relations Tom Petersen serves as a liaison between the community and the school district. He is responsible for handling media requests and serves as the district spokesperson. He coordinates production of District and school publications, maintains the District website, oversees operation of the District mailroom, and coordinates the District 211 Foundation administrative efforts. Mr. Petersen graduated from Northern Illinois University with a bachelor’s degree in journalism/advertising in 1983. He also completed 25 hours toward a master’s degree in communications from Iowa State University. He was an athletic department media relations specialist for eight years at three NCAA Division I institutions, including the University of Colorado (1987-1992), Kansas State University (1986-1987), and Iowa State University (1985-1986). He began his District 211 career in the publications office in 1993, and was named community relations coordinator in 1995. Mr. Petersen is active in the Palatine Chamber of Commerce, serving on the board of directors, as well as a school district liaison. He is a 1979 graduate of Palatine High School.